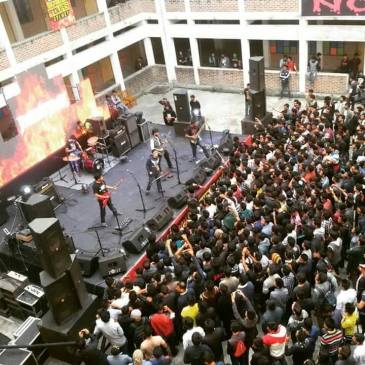 More or less, the metal scene of Bangladesh has been dominated by the bands from Dhaka, the capital city. It is not that there were no metal bands outside of the capital, but recently, a significant improvements can be observed in the metal scenes of other cities. Emergence of a good metal scene can be seen in Sylhet, the swampy land of the country; a few good bands, gigs and a record label have recently come into view from this place. Thrash metal hexad PSYCHOTRON, The Hillside Thrash Maniacs, has undoubtedly played an important role to develop the metal scene of Sylhet. The band was  formed back in the 2011, when the metal scene of Sylhet was still in its infant stage. Apart from partaking in the local shows, Psychotron has also performed live in Dhaka and also appeared in a compilation CD that featured both local and international bands. Recently, the band shared stage with the leading Rock & Metal bands of the countries in “Rocknation Tours Sylhet”.

Mortuary Productions, the first ever metal music record label from Sylhet, will be releasing the debut EP of the Psychotron in April, 2016 (in CD format).  The EP “Lethal Paralysis” consists of 04 neck wrecking thrash anthems including a different version of an old track (Excavate Your Own Grave) released in a compilation. The tracks of the ep have already been played by the band in various gigs. Elements of both old school and modern thrash metal can be perceived here, and the blending provides a deadly strike to the auditory organ of the listeners. It can surely be expected that this release will be leading the Sylheti metal scene to a new direction. “Qabar – Extreme Music PR” has been assigned to handle the PR/Promotional activities.